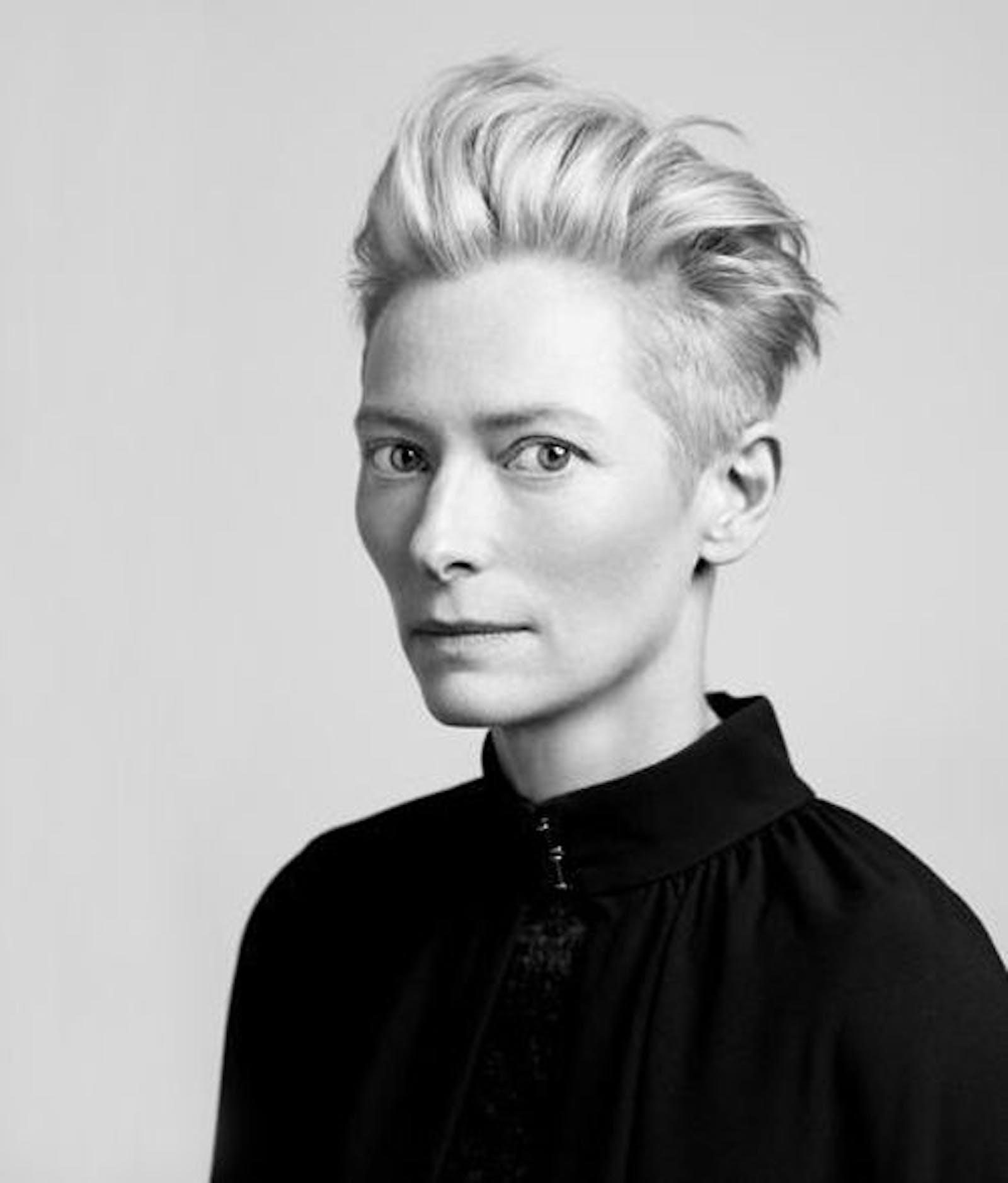 A native of Scotland, Swinton started making films with the English experimental director Derek Jarman in 1985, with Caravaggio. They made seven more films together, including The Last of England, The Garden, War Requiem, Edward II (for which she won the Best Actress award at the 1991 Venice International Film Festival), and Wittgenstein, before Mr. Jarman’s death in 1994. She gained wider international recognition in 1992 with her portrayal of Orlando, based on the novel by Virginia Woolf under the direction of Sally Potter.

She has established rewarding ongoing filmmaking relationships with Lynn Hershman-Leeson with whom she made Conceiving Ada, Teknolust and Strange Culture, with John Maybury with whom she made Man 2 Man and Love is the Devil, with Jim Jarmusch (Only Lovers Left Alive, Broken Flowers and The Limits of Control) and Luca Guadagnino with whom she made The Love Factory and the widely applauded I Am Love which she co-produced over the span of a decade.

In 1995 she conceived and performed her acclaimed site-specific live-art piece The Maybe – in which she presents herself lying asleep in a glass case – which was originally performed at The Serpentine Gallery in collaboration with an installation she devised with Cornelia Parker. 22,000 people visited The Maybe there, making it the most popular exhibition of its time. The following year, in collaboration with the French artists Pierre et Gilles – and for comparable numbers of visitors – she performed the piece at the Museo Baracco in Rome. In 2013, The Maybe was remounted at MoMA in New York, where the specifics of its incarnation there meant that it appeared unannounced, unaccompanied by any artist’s commentary, official images or finite schedule, in various spaces in the museum.

Swinton has also appeared in Spike Jonze’s Adaptation; David Mackenzie’s Young Adam;  Mike Mills’ Thumbsucker and Francis Lawrence’s Constantine; Béla Tarr’s The Man from London, Andrew Adamson’s two blockbusters The Chronicles of Narnia tales; Tony Gilroy’s Michael Clayton – for her performance in which, she received both the BAFTA and Academy Awards for Best Supporting Actress of 2008 – and Erick Zonca’s Julia, which received its world-premiere at the 2008 Berlin International Film Festival and which – on its release in the UK won for Swinton the Evening Standard’s Best Actress award and which performance was named as Indiewire’s hands-down favourite of that year.

In the summer of 2008 Swinton launched the Ballerina Ballroom Cinema of Dreams film festival in her hometown of Nairn, Scotland. In 2009 the festival not only curated a Scottish Cinema of Dreams edition in Beijing, but in August, returned as a mobile cinema – A Pilgrimage – that travelled and was bodily pulled for an hour each day, from Kinlochlevan on the west coast of Scotland to Nairn on the east coast. All three festivals became events of international interest.

In 2010  Swinton launched, along with Mark Cousins, their 8 and a Half Foundation which seeks to establish a new birthday for children – the 8 and a halfth – for the celebration of a magical introduction to the wide company of cinema fandom. Inaugurated first in Scotland, two thousand children have benefitted from the first two years of this initiative to date.

Swinton worked with Wes Anderson on the movie Moonrise Kingdom in 2011 and can be seen in the recently released feature, The Grand Budapest Hotel. Swinton also features in the upcoming titles, Snowpiercer, directed by Bong Joon Ho and Only Lovers Left Alive, by Jarmusch, both of which will be released this year worldwide.
Tilda Swinton is the mother of twins and lives in the Scottish Highlands.