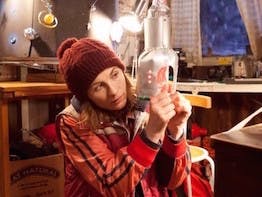 Anna Smith finds a rich crop of  female voices behind and in front of the camera in this year’s BIFA nominations.

Last year, the discussion about gender in film finally went mainstream but, whether they’re in front of the camera or behind it, we still need more women to be part of the art of cinematic storytelling. Earlier this year, the European Women’s Audiovisual Network found that only one in five European films was directed by a woman, with 84% of public funding going to male directed films. A US study from MDSC found that only a third of the speaking roles in the year’s most popular films went to women – a statistic that hasn’t changed since 2007.

So it’s good to see some improvements on the numbers of last year’s BIFAs. While there are slightly fewer female nominees overall, women are more visible in key categories such as Best Director and Best Debut Director (last year featured none in either category), Best Screenplay (two are nominated) and Best British Independent Film (six women are included, four more than in 2015).

Many of the films with female crew have a focus on women. Andrea Arnold’s American Honey follows the adventures of a teenaged runaway on the road in the US, featuring a breakout performance from nominated newcomer Sasha Lane. Debut Screenwriter nominee Rachel Tunnard’s Adult Life Skills features the kind of heroine we should see more of: a British woman approaching her 30s who’s simply trying to work out what to do with her life. Beautifully portrayed by Best Actress nominee Jodie Whittaker, she is no idealised fantasy figure; rather a real, flesh and blood woman with a strong character and a witty way with words. Tunnard’s funny comedy-drama refuses to conform to stereotypes and features a stand-out performance by Alice Lowe as Whittaker’s outspoken friend and co-worker.

Sightseers star Lowe is also nominated for The Douglas Hickox Award for Debut Director, for her striking first feature Prevenge. Lowe wrote, directed and starred in the dark comedy-drama while seven months pregnant. The very act of doing so smashed as many stereotypes as the film itself: in Prevenge, her expectant heroine seeks bloody, violent revenge on a series of men – a far cry from the kind of gentle, maternal types so often depicted on film. While very funny (not to mention disturbing), Prevenge’s protagonist is also a credible character: a woman who is defined by her personality and experiences rather than her physical condition.

Outside Britain, director Alice Winocour scores a Best International nod for her heartfelt feature Mustang, the memorable tale of a group of Turkish sisters who are locked away by their father, who is attempting to marry them off one by one. Fantastic performances from a group of newcomers help make Mustang a must-see, and it is also a film with an important message about the fate of young women in a patriarchal society. Each sister has her own reaction to the incarceration: some try to rebel, others sorrowfully acquiesce in a deeply moving portrait of female bonding and empowerment that also saw the film nominated for an Oscar.

Another film with a powerful message is Short Film nominee Rate Me, produced by Taina Galis. A fascinating insight into the treatment of online escorts, it draws from real comments left by spiteful punters about a young woman in the sex industry. It’s a bleak watch but a riveting one that provokes plenty of thought around the issue of gender relations as well as the danger of online anonymity.

The heroine in The Girl With All the Gifts, Melanie, is unique: a young black girl who spends much of the film strapped to a wheelchair. Oh, and she’s a zombie, or a ‘hungry’ as Mike Carey’s terrific adaptation of his own novel calls them. Sennia Nanua puts in a tremendous performance as the bright, engaged child who is capable of great affection despite being a victim of the violent virus. Aside from being one of the most nuanced depictions of a zombie character, it is also a rare cinematic insight into the mind of a young human (or previously human) female, and it’s Melanie’s story that drives the plot forward.

The Girl With All the Gifts is one of several nominees that passes the feminist rating system The Bechdel Test with flying colours, in that it has at least two named female characters that discuss something other than a man, together. Discussing many topics with Melanie is her kind teacher Miss Justineau, sensitively played by nominee Gemma Arterton, an actress who has long been vocal about the need for interesting female roles. The relationship between pupil and teacher is a complex one: Melanie adores Miss Justineau at girl-crush levels, and the teacher holds her dear despite the fact that the girl is part of a group all her peers fear and despise. These are two independent thinking females who cling strongly to their own beliefs despite the men that doubt them – and that have the power to change the thinking of the latter, too.

Another another compelling mother-daughter relationship is at the heart of Under the Shadow, the story of a pair haunted by an evil presence in war-torn Tehran. Narges Rashidi is nominated for Best Actress for this lauded horror in which she and her daughter bond and bicker while facing an unseen enemy. Like The Girl With All the Gifts, this is a complicated relationship between two females that brings a strong sense of credibility and reality to a supernatural thriller.

Of the nominees for Outstanding Achievement in Craft, one is female: Shaheen Baig, the casting director for Free Fire, a thriller with a notable female presence in Oscar-winner Brie Larson. Several talented female producers are nominated in the Breakthrough Producer category as well as sharing credits for Film nominees, while Hope Dickson Leach has a Debut Screenwriter nod for The Levelling.

With still only 39 of 121 nominees female, 17 non-white and one learning disabled, there is still a long way to go for representation in independent film. But there is much to celebrate about the depiction of women in film this year, not to mention the outstanding talent of the nominated cast and crew.