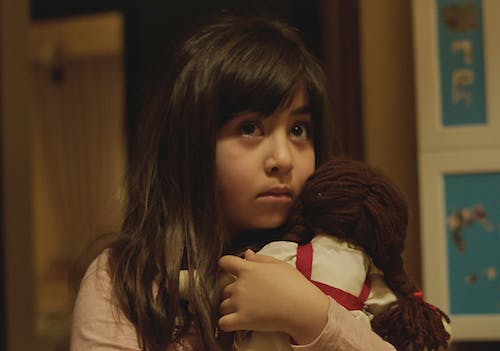 For first-time director Babak Anvari, the story that underpins his thriller Under the Shadow is deeply personal.

‘I was born and raised in Tehran in the early years of the revolution,’ he said, ‘and during the Iran-Iraq war it was mandatory for my father to serve as a doctor for a month each year in the war.  The months when he was away were like hell for my mother. She recalled how truly afraid she was during those times, despite efforts to keep herself together.’

It’s that fear that manifests as the malevolent spirits of Iranian myth, the Djinn. ‘As a child, growing up in the Middle East, I used to hear many stories and urban myths about Djinn from other kids, and how they harm humans. These stories used to terrify me.’

Add to that the severe Iranian regime of the era – one which oppressed women and free-thinkers alike – and Anvari has all the ingredients for a profoundly psychological horror story. His movie mother is overwhelmed, with bombs falling from above, spirits surfing on the wind and gun-toting zealots on the streets.

Perhaps the most potent part of the film’s toxic concoction, however, is the mother-daughter relationship at its heart. Shideh (Narges Rashidi) and little Dorsa (Avin Manshadi) enjoy a familiar family dynamic – affection and irritation, loyalty and resentment.

When an Iraqi missile crashes into the apartment complex, carrying with it the mysterious Djinn, and Dorsa falls terribly ill, Shideh unravels. Her confusion and fear and feeling of helplessness is cloying, creating an atmosphere thick with paranoia.

Both actresses come to BIFA with their own nominations, and it really is a film that lives and dies by that central relationship. Rashidi revels in the rage of her character, her dreams of becoming a doctor squashed by the new regime. But that anger comes at a cost, and as she discovers what that may be, raw terror is unleashed. Meanwhile in her debut performance, Manshadi acts with gusto, her character at once helpless and powerful.

Theirs is relationship that hearkens to the classics of the genre, with some critics likening it to the mother-son dynamic in the acclaimed Australian picture The Babadook. The anxiety of a mother’s love is suffocating.

What sets this film apart, however, is the backdrop. From the 1980s apartment at the heart of the action to Shideh’s treasured workout video, from the broken garage door at the bottom of the building to the dud missile sticking out of the top.

There’s an intimacy in the detail; it grounds the supernatural in reality. Coupled with the film’s true-to-life central relationship, it creates a truly household horror. It’s cabin fever. It’s inescapable.