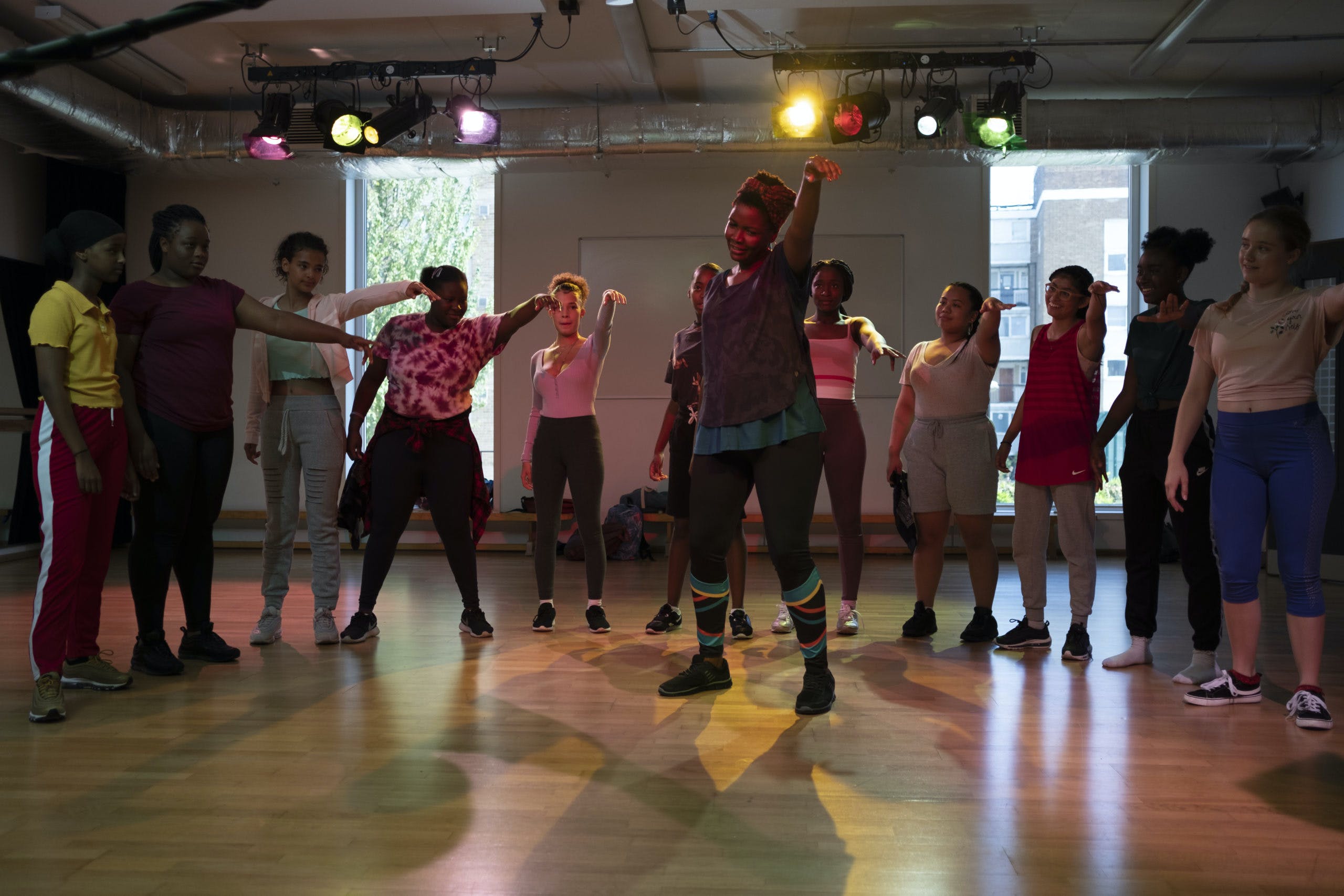 We sat down with the team behind Rocks’ diverse soundtrack, Connie Farr (Music Supervisor) and Dom Farley (Assistant Music Supervisor) to learn about their process and some of their favourite tracks.

We have worked with Brownswood for many years and loved this track since it first appeared on the “We Out Here” compilation back in 2017. This track perfectly captures summertime in London and when we first saw the montage scene on the rooftop this was our immediate choice and was in our first round of suggestions that we sent across to Sarah and the team.

We were always eager to include something from the South London jazz world in the film. It’s an incredible movement, relevant to the world of the film itself, but has limited exposure on screen. Given how iconic this track is within that world, and how joyous and relatable the scene it’s used over is, we’re really pleased that we could marry the two. It’s one of our favourite moments of the film.

During the pre-production stages of ROCKS, we attended Afro-beat dance classes with production to immerse ourselves in the girl’s world and put together a selection of music options inspired by these classes, tracks that we knew we could clear. Some of the dancers were also chosen from this process so we were totally involved with this scene from the very outset. We also attended the filming of these scenes to ensure everything went as smoothly as possible at every point.

We received this particular track from a close connection who works within the worlds of Afro-beat and underground club music. Jowaa is Gafacci, a DJ and producer based in Ghana who’s currently turning a lot of heads with his unique blend of sparsely-produced Afro-beats mixed with Hip Hop, Techno and Jazz; it’s exciting that the girls fell in love with this track and responded to it so well, especially over such a lively and memorable scene.

Months before the shoot, this track was included in the first round of suggestions and added to the girl’s playlists which they could sing along to on set. A killer track, it was on repeat for us in the office too. We are so happy that it found its place in the film. Often it’s hard to visualise exactly where a commercial cue will fit until you’re in the edit but this is one of those ‘got it’ moments for us.

There was a lot of discussion whether score or sticking with a commercial track would fit this scene as it’s a very emotionally complex cue but the way it was woven in works beautifully.

On some of the film we also worked with Universal Music’s film department Globe, specifically facilitating the recording of “Warrior”, the bespoke track written and performed by Ray BLK for the end credits. Working with an artist of BLK’s status and talent was an exceptional process, the song perfectly captured the emotion of the story and the strength within the characters. The feedback process was fluid and uncomplicated and it was clear we were all on the same page from the start which just adds to how special this song is and how beautifully it concludes the film.

We discovered Koffee before she’d actually been signed here in the UK and pitched her in our very first ‘mood playlist’ when we received the ‘Script Bible’ for Rocks. As an artist she fits perfectly into the world of the film, we love the scene of the girls doing their makeup in the playground and Koffee’s “Throne” felt like a natural choice. While it was sometimes difficult to present tracks that were pre-release and no one recognised, everyone was a huge fan of her from the outset.

Why did you want to tell the story?

Rocks presented a significant opportunity for us to champion music from artists and genres that have minimal exposure on the big screen. From Afro-beat and Jazz to Somali love songs; club music to traditional Turkish music, the vast amount and variety of music is remarkable and the chance to craft the world of Rocks through music was really exciting for us. Sarah [Gavron] is an exceptional director to work with and it felt like a really open and collaborative process at every point.

We spent a lot of time immersing ourselves in the girl’s world. We needed the soundtrack to echo the multitude of cultures that you encounter during an average day in Dalston, as well as create a unified musical identity that represents what it feels like to be a teenager in inner city London. The core cast of British girls came from differing cultural backgrounds, including Nigerian, Somali, Polish, Bangladeshi, English and Congolese-Ghanian and we interviewed each of them in pre-production to get an idea of each of their musical tastes and influence.

It was an extremely tough but very rewarding job to marry together the musical tastes of the girls themselves, engage them with up and coming or lesser known artists, explore a wide range of styles, avoid cliched, obvious choices and to also keep it within our budget!

The improvisational nature of Rocks also had a big impact on our music supervision dept which was unique and great fun. We worked throughout pre-production clearing in excess of 100 tracks across a multitude of rights holders; the aim being to supply each actor with a phone on which were personalised selections of pre-cleared songs that were ‘safe’ to play on set, depending on the mood and the direction of the day. A vast number of these tracks were unreleased and involved close communication with rights holders and A&R departments to secure. We also attended the shoot whenever possible to co-ordinate playback and deal with any musical issues which arose.

Ultimately ROCKS is about the girls and the enduring spirit of sisterhood; being able to bring this to life through music was a huge driving force for us and it was an honour to be part of the process.

Check out the full soundtrack on Spotify.

Rocks is out now in cinemas. Head over to watch.bifa.film to find a screening near you.