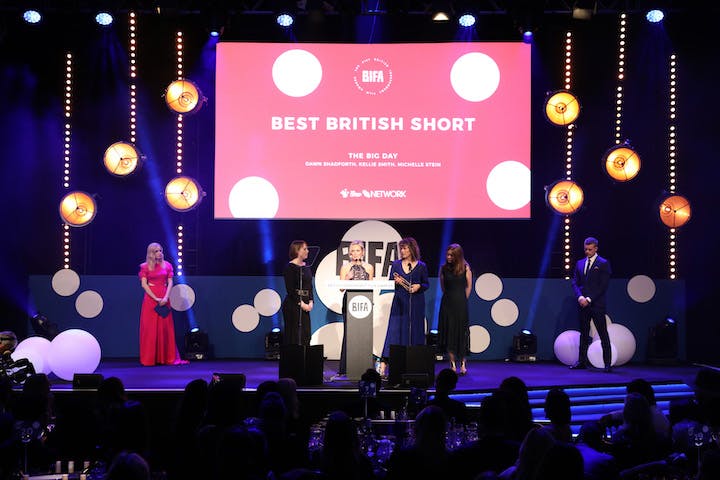 Thursday 13th June saw us in Manchester, screening the five films nominated for our Best British Short Film award in 2018 with our partners BFI NETWORK and Film Hub North.

Following the screening, we sat down for a Q&A with the writer and producer from winning short The Big Day, Michelle Stein and Kellie Smith. The talk was moderated by Jennifer Monks, who produced Michelle and Kellie’s other BIFA-nominated short film, To Know Him.

You can listen to a recording of the full 30-minute Q&A here!

Below is an edited transcript of the session:

How did it all begin for The Big Day?

Kellie: I think that it was six months with 18 writers on it. They took us away and taught us everything that they knew about film, and the differences between writing for film and writing for theatre. We each wrote a feature treatment and a short film, from which they chose three shorts to produce.

Michelle: They asked me to produce the three short films. I had to ask myself if I could do it; I’ve produced a lot of short films and each time it’s a bit like going to war. I didn’t want to spend three years of my life producing three short films, so we had to think of a really economical way to do them. Myself and Alice Ramsey and Paul Ashton from Creative England had the pleasure of reading 18 short film scripts and choosing which three to produce, and The Big Day was one of them. We then managed to get great directors attached and a decent budget from Creative England.

What inspired this story?

Kellie: I always feel awkward answering this question! There was a wedding that was being planned in the family and there was a lot of debate about whether one person should come or not, and what the conditions might be around their attendance. I suppose that those conversations were in my mind a lot, as well as what it might feel like to be that person. I’m in a step-family myself and I’m fascinated by them and all the complex dynamics that come about. As often happens with ideas, you have a lot of things percolating and one thing just brings it to life. Someone told me an anecdote about someone who was a bridesmaid at a wedding, picked up the three year-old daughter of the bride, spun her around, dropped her and broke her arm. At the wedding. The moment I heard that, I could see the film, I could see the character and the ending, so it was about finding the story.

What was it like handing your script over to a director?

Kellie: I was a playwright – The Big Day and To Know Him are my first films. The unusual thing about this process was that we got to interview the directors before production. I met Dawn and she wasn’t really in for all the bullshit of interviews; we just sat down, made eye contact and had a good laugh and a chat about the film. After that, and seeing the aesthetics of her music videos, I thought that she’d be brilliant for the film. We also got to workshop the script with the actors for a couple of days before it was filmed, making sure that the relationships between the characters felt really convincing and believable.

Michelle: We wanted to keep it very writer-led, since the scheme was all about writers. It felt important that the writers were empowered throughout the process instead of, as often happens in film, the director tasking over at some point.

Kellie: I wasn’t at the casting but they sent me videos and there were three different girls lined up to play Jess. It made me realise that, had you cast any one of them, it would be a very different telling of the story. One was quite young, troubled-looking. Another was a bigger girl and would have made the parts of the step-family look a lot meaner and superficial. As soon as I saw Jennifer Bea, I knew that she was right for the part. She had that quirky, innocent, slightly annoying quality about her. They interviewed me for the script and I didn’t yet have the knitting in it – I came up with the idea in the interview and it all clicked together. As soon as we had (excuse the pun) threaded that through the script, it really brought the character to life and Jennifer was a great match.

You shot The Big Day on film so you had to take some specific practical and creative decisions in terms of shooting it. What was that like?

Michelle: Until very close to shooting, we were not shooting on film. A few things changed. We had always wanted Robbie Ryan to shoot the film as he had worked with Dawn in the past, but Robbie is the kind of DOP who might be offered a massive film at very short notice so he can’t really commit to short films ahead of time. We started lining up another DOP but then Robbie became available at short notice so we brought him on board. It put us in an awkward position with the other DOP but Robbie had that existing relationship with Dawn and you can’t take that for granted. They started talking about shooting on film. When Fujifilm stopped trading, Robbie bought their remaining 16mm and 32mm film stock to use on his personal projects. He’s incredibly generous and he decided that he wanted to use his film on our film, saving us a huge cost. He also put us in touch with someone who could negotiate an amazing deal for film processing, which is also really expensive. Robbie then pulled focus on the film himself, saving us a crew member in addition to the DIT (Digital Imaging Technician), who’s only needed for digital shoots. All this helped even the budget out. However, the problem with shooting on film as a producer is that you can literally see the stock running out, which is nerve-racking.

The relationship between producer and writer is one of the first established on a film. You guys have worked together a few times, how does that work?

Michelle: Kellie did an amazing job with the screenplay and so we didn’t really need to develop it much. We tried once but it didn’t work – we gave Kellie some notes, she changed some stuff, but it was better the first time.

Kellie: I realised that in a lot of my writing the drama relies on the subtext between the characters. I think that in the second draft we tried to make the subtext more overt and it didn’t quite work. The really nice thing is that through that process we developed a relationship, which then led to To Know Him…

Michelle: I had worked with Ted (Evans, the director of To Know Him) previously and we’re developing a feature film together. He had applied for funding for this feature but didn’t think that he’d get it, so also applied for funding for To Know Him. Then he got both and couldn’t commit to writing two screenplays at once, so we got Kellie to write the short. I wanted a production team that would work across all three films and Jen crazily volunteered for the line producer role, and out of that I approached her about To Know Him too…

Have you got any advice for newer or emerging filmmakers, particularly those not based in London?

Jen: Get out, find your networks and make stuff. You have to start cutting your teeth, forming your team and making stuff to show and learn from. It’s a really long journey in terms of being successful in film and all those little experiences and problems along the way teach you everything you need to know. Being outside of London is actually a positive thing, a USP, in a way. You’re a bigger fish in a smaller pond and you have something distinctive. Find your USP as a storyteller because that’s what commissioners and funders are looking for and it’s what punches through.

Michelle: There is a network here. The BFI has a presence in the regions with development and funding programmes for features and for shorts. It’s competitive but it is also accessible.

Entries for the 2019 Best British Short Film Award, supported by BFI NETWORK, are now open. You can read more about the rules and enter a film here.