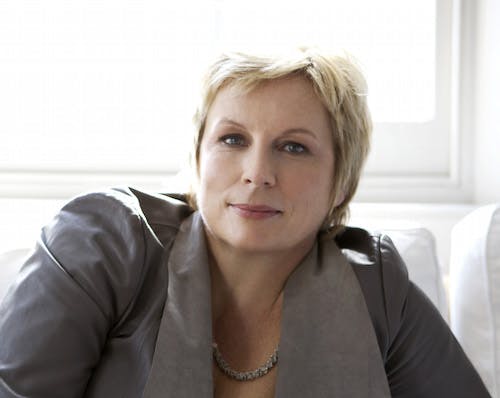 What were your first thoughts when you were asked to host the 2016 British Independent Film Awards?

I liked the idea of it. I thought it was quite a nice alternative to the old overblown BAFTAs and everything else. It’s good, because, actually, I think a lot of people aren’t aware how many brilliant films are independent and British.

What appeals to you about the BIFAs? Have you been before?

No, I haven’t. I’ve never had anything to do with the film world until we made the AbFab movie. That’s the only time. I just thought it sounded like a good gig, to be honest. A good, fun night. And not too pompous – I hope!

I don’t like to waffle on. I like to… [Laughs] I’m sounding like I’m an expert at this, which I’m not! I think I’ve presented an award about twice. But I hope that I can give people what I like, which is someone who gets to the point – but not bossily – and is funny. There’s nothing worse than someone just going on and on and on. [Laughs] Get off! It’s not about you!

Will you be doing any superstitious rituals before going on stage?

No, not really. I quite like to be quite well prepared, that’s the only thing. The worst thing is being caught out and not having anything to say. So it’s good to have a few things up your sleeve. And it’s important just to relax. The awards shows I go to that I enjoy, you feel that if the autocue goes down, you know it’s not going to be the end of the world.

What will be your signature move? When James Nesbit hosted the BIFAs he used to sing…

He sang comedy songs, in the style of Frank Sinatra.

Really? Oh Christ. I haven’t worked up anything like that! I don’t have an act, no.

Which other awards show hosts have you seen in action, and who do you think are the best?

I don’t think you can ever better Graeme Norton. I just think he’s got such a great way of finding it all very funny to begin with. It just relaxes everybody. And also, that means that when someone does have something important to say, there’s a bit of contrast, a bit of space left. Overall, you want a bit of a laugh, you want things to be noticed, you want everyone to be given a fair chance, and at the end of the evening you want to be able to say, ‘God, that wasn’t too stressful.’ Whether you lose or win. What Graeme does really well is make everyone in the room feel like they know each other, and I think that’s a talent.

What do you reckon is the best thing about hosting an awards ceremony?

The best thing is that it’s never as frightening as you think it’s going to be, because everybody in the room really wants it to go well. They’re only there for one reason, and that’s to support the cause of independent film.

And what’s the worst?

When it’s sticky. Oof! That awful stickiness! Or people aren’t well-oiled enough. I just hope people are well oiled enough. One year at the Comedy Awards they decided not to give anybody any drink, and it was absolutely, fatally dismal. Awards shows went downhill when everything started to be televised. In the old days, you’d go to the BAFTAs, everyone would get completely pissed, have a dinner, be funny and cheerful, then they’d go up and make hilarious speeches – because they weren’t on camera. The second it becomes formalised, it becomes somebody else’s TV show, and that’s when it stops being fun for the people going. You think, ‘I’ve got to go down the fucking red carpet, be fucking photographed again’ – that’s the pain of it. When in fact it should be just a bloody good evening. The people that win should be cheered and the people that lose should be patted on the back and handed a large drink.

Tons of people. I’ve never met Andrea Arnold. I’ve never met Ken Loach, although I know his daughter. Alison Steadman’s getting a special award, and she’s one of my all-time heroines. I know her a little bit, but I’ve never worked with her. She’s brilliant.

You’ve been nominated for many awards and won. What are the elements of a great acceptance speech?

As little as possible. Thank the people that actually matter. And sometimes that isn’t your whole family. Thank the people you worked with, not God. Thank the people that got up every morning and helped you make the thing. Make it brief and not too self-congratulatory. [Laughs] You can tell I’m going to be quite strict, can’t you! And if you’re in a big group, not everyone has to say something – have a spokesperson!

You’ve also been nominated and not won. What’s the secret of being a gracious runner-up?

Well a) don’t expect to win, because it’s not likely to happen, and b) practise saying the words ‘I knew that!’ – then mouth them so the camera can catch it. ‘I knew that! I’m so happy for them…’ Then stand up and applaud. The worst thing you can do is almost stand up, as if you’re about to get up and win. That can be funny if you do it as a joke. But it also pulls focus, so it shouldn’t be allowed.

How do you feel about the future of British independent film?

Blimey! [Long pause] They probably all have one, don’t they, the biggies? All your Mirrens. I mean, your Dench and your Smith have probably had one. I think someone like Timothy Spall. Or Miranda Richardson. People who constantly make interesting choices. I admire them a lot and I’d always go and see something they were in. They do small parts, too. They don’t always have to be the lead.

[Laughs] I’d like Best Director of Foreign Film, please! That would be nice! Ummm, I don’t know. Promptest Person on Set? No, I’m not even that prompt. How about Best Wearer of Wig. I wear a wig very well. I have a very good forehead, I’ll have you know.