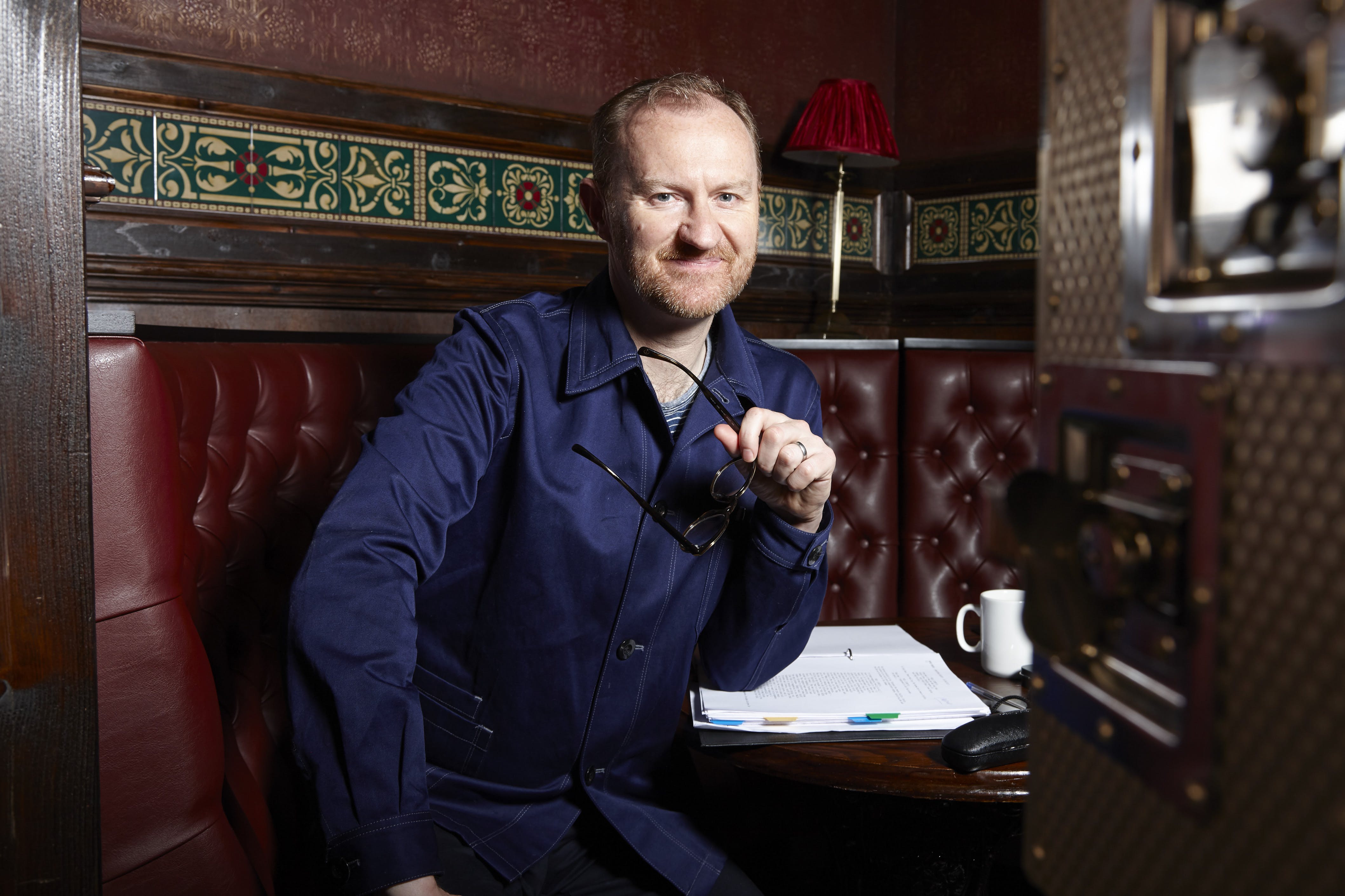 Damon Wise speaks to BIFA 2017 host Mark Gatiss ahead of the big night.

What were your first thoughts when you were asked to host the 2017 British Independent Film Awards?

Nausea. [Laughs] No, I was delighted. I haven’t done many presenting gigs like this, but it’s a very good one to do, I think.

Well, it seems to me that we have a very healthy independent film industry, but it’s sort of on the quiet, isn’t it? It always surprises me how many films actually come out. The danger is we don’t get to see enough of them, but I think there’s something going on. I feel that there’s something in the air, that people are going to see more slightly off-centre indie films than they have of late, so it feels like a good time to be celebrating that.

What do you think separates the BIFAs from other award shows?

Well, given that there’s so many big glossy ones, a lot of awards ceremonies have become much more corporate. We all remember those extraordinary days when BAFTA was all in one evening. I mean, imagine that now! I used to love it. I used to stay up and watch it until about 4am, with Dickie Attenborough stood up there. But it’s three separate things now. Well, probably more. So it’s nice to do one where there isn’t a silly focus on the red carpet and stuff like that. It’s just about celebrating the films themselves, and the filmmakers, and enjoying the moment.

Chaos. [Laughs] Well, I’ll try and make some jokes, I think! And just have a good time. I just like enjoying myself. The good thing about having that sort of approach is that everyone’s there to enjoy themselves. The clue is in the in the title, isn’t it? It’s an indie thing, as it were. You don’t feel like you’ve got to be in your complete best bib and tucker on the red carpet for the world to scrutinise. It’s about ploughing a different furrow. So I just want to make the whole thing go with a swing and, obviously, as quickly as possible. That’s what people always like. [Laughs] That’s the truth! No one ever talks about that, but it’s the truth.

Is it a good year for British film?

There’s some great stuff around. I’ve just seen God’s Own Country, which I loved. I really enjoyed Lady Macbeth. The Limehouse Golem I was watching the other night. Some strong stuff. I’ll tell you what it is: it feels like there’s a lot of ambition around, which is good. It’s not just 17 variants on a Ken Loach film. It’s something that’s still distinctly British but not unambitious. Which I suppose, in a way, is what might have slightly hobbled us in the past.

Do you have any rituals that you do before going on stage?

No. Well, maybe I do before a play, but that’s just terror, isn’t it? You just pace around, reading all the lines, wondering why you’ve done this to yourself. [Laughs] It’ll probably be a version of that!

What will be your signature move? When James Nesbitt hosted the BIFAs he used to sing…

You know, I was thinking about this today. Everyone should have a party trick, shouldn’t they? And I don’t know if I do. Actually, I used to be able to put both my legs behind my head but I don’t think I can really, do that unless we have most of the afternoon as well… That was my yoga party trick. But I’m not going to sing, definitely. I might sing as James Nesbitt. [Laughs] Remember [‘70s impressionist] Mike Yarwood? He always used to sing on his TV show, and my dad always used to say, “How come he can sing as Frank Sinatra but not as himself?” Very good question! So I might do a song as Jimmy Nesbitt and see how it comes out.

What’s the secret of being a good host?

I think it’s about relaxation and wanting to just have fun. It’s not the UN. You’re just trying to keep things bubbling along and get to the awards and get to dinner, aren’t you? I think that’s the key. That’s the secret: brevity. Tell that to Twitter!

It’s great meeting people. It’s quite amazing who you meet. I met Martin Landau one year, and you think, ‘Well, I didn’t expect THAT to happen.’ So sometimes it’s an amazing collision of worlds, isn’t it? Depending on who’s in town and who’s presenting, you never know who you’re going to come across. I think that’s very exciting. I met Tony Curtis and Roger Moore one year. Imagine that!

And what’s the downside?

Well, we’ll have to see, won’t we? [Laughs] I’ve been to enough BAFTAs, and… It’s something that never comes across on the TV, but people just talk, and there’s a point in the evening where people are just openly ignoring the host. I always feel very bad for them. I won’t name the event, but I remember going to one TV awards ceremony, sponsored by washing powder, and it was like being at a rough wedding. I remember thinking, ‘This is getting quite scary. If this table doesn’t win, there might be a fight…’

I’d very much like to meet Francis Lee, the director of God’s Own Country. He’s a former actor, I know that, and I thought he made a wonderful film. I loved the authenticity of it. As far as I’m aware, he lives on a farm with his dad and he only comes to London on sufferance… So maybe he’s not coming – he’s probably lambing! But I just thought the whole approach and idea of the film was very touching and brilliantly done, so I would very much like to speak to him. And if Michael Palin’s coming, I shall, as ever, be starstruck. He’s one of the people who always leaves me slightly gobsmacked, because he’s a great hero of mine. I first met him when he came to a screening of The League Of Gentlemen Christmas Special 17 years ago. He was in the coat queue. I couldn’t believe it. I was dumbstruck.

You’ve been nominated for many awards and won. What are the elements of a great acceptance speech?

Brevity and jokes. I mean, it’s amazing how few people realise the importance of this. Get on, make them laugh, get off. And if you can do that, then you’re all right. People remember it and they do appreciate it. Oh my God, I can’t name names but I was at an awards do last year where… It wasn’t an actor but someone got up to accept an award and spoke about global warming for 40 minutes. No joke – 40 minutes. And nobody was able to get up and stop them, there wasn’t a band to play them off. The whole show after that was then super-quick, because everything was thrown out of whack – it was literally the first award. It was a noble platform, but there wasn’t even a camera on them! So, definitely, brevity.

You’ve also been nominated and not won. What’s the secret of being a gracious runner-up?

Depending if there are cameras on you, you need to have a gracious loser’s face. Don’t mouth the words, “Oh for fuck’s sake.” Which people often do. I suppose it’s good to have a sense of humour about it, that’s the thing. It’s lovely to win. If it’s there to win, I always think it’s nice to win. But it’s not the end of the world, is it? Although some people think it is!

I suppose The Death Of Stalin, because I love the idea of that ensemble cast, and there are such wonderful people in it. It looks like a lot of fun whilst having a brilliantly blackly comic subject, so I would have liked to have been in it. [Indignant voice] In fact, I can’t believe I wasn’t in it! [Laughs] What’s going on??!

How do you feel about the future?

In an existential way? Very bleakly. But in terms of film, I feel a lot happier – if there are films made after Christmas, when we we’re all going to be blown up. [Laughs] I feel very optimistic, actually. As is so often the way, there are major trends and then there’s a reaction to those trends. Like, I think the superhero bubble that is totally dominating Hollywood right now will obviously – it must – burst at some point. Or a couple of $300m films will just tank, and then there’ll be a kind of forest fire and something tiny and interesting will come out of that. I think in the same way, at the moment, there are lots of very interesting little films being made quietly in the corner, whilst there are juggernauts being made elsewhere. It feels very healthy to me. It feels like a different world to a few years ago. A lot more things seem to be getting greenlit now that might have felt a bit niche or a bit difficult in the past. There’s a lot more willingness to invest in those kind of stories without saying, “Yeah, but how are we going to sell it to the Americans?” or, “It needs a murder in it.”

Well, the risk is, a lifetime achievement awards always feels like it’s the end of something, doesn’t it? People are always unwilling to accept them. Oh my goodness… [Pause] There’s a brilliant, brilliant actor called M Emmet Walsh. He was the villain in Blood Simple, the Coen brothers’ first film. I’d give it to him. I just think he’s marvellous. He’s one of those actors you always feel very happy to see.

For presenting the British Independent Film Awards. [Laughs] I think I’d like a holiday, please. Or a car. [Laughs] Oh, it’s like 3-2-1…