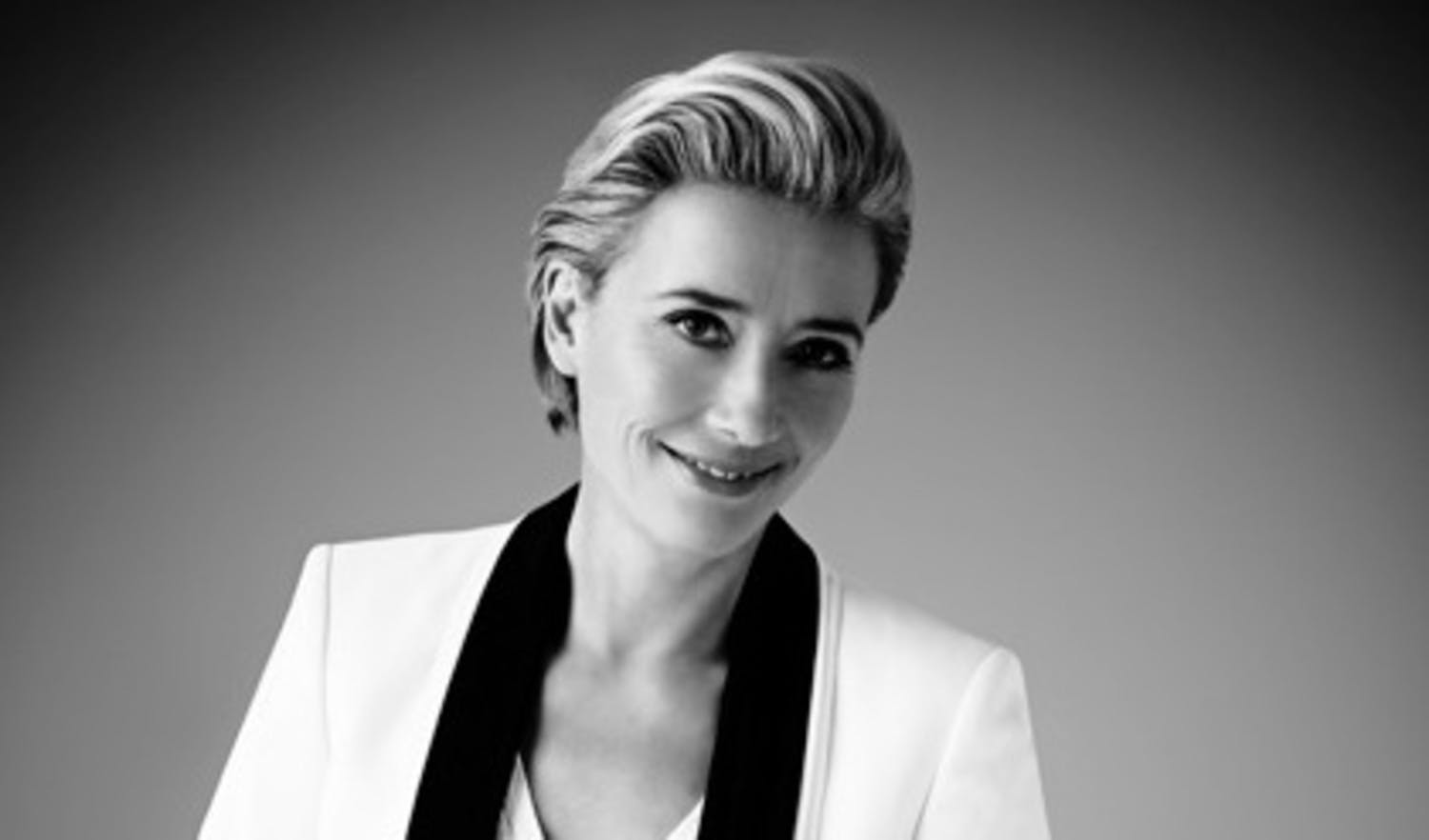 Emma Thompson will receive The Richard
Harris Award at the ceremony on Sunday 7h December at Old
Billingsgate.

Emma Thompson is one of the
world’s most respected talents for her versatility in acting as well as
screenwriting.  She is the sole artist thus far to have received an
Academy Award for both acting and screenwriting.

Thompson commented: “I am so
delighted to be receiving The Richard Harris Award at this year’s MBIFAs. It is
a very special award, in name of an incredible actor who inspired so many
people during his career. I am honoured to follow in the footsteps of my peers
who have received this award before me, and look forward to celebrating a
fantastic year of British independent filmmaking on 7th December.”

In 1992, Thompson caused a
sensation with her portrayal of Margaret Schlegel in the Merchant Ivory
adaptation of E.M. Forster’s HOWARDS
END.  Sweeping the Best Actress category wherever it was
considered, the performance netted her a BAFTA Award, Los Angeles Film Critics
Award, New York Film Critics Award, Golden Globe and Academy Award.  She
earned two Oscar nominations the following year for her work in The REMAINS OF THE DAY and IN THE NAME OF THE FATHER.

In 1995, Thompson’s adaptation of
Jane Austen’s SENSE AND SENSIBILITY,
directed by Ang Lee, won the Academy Award for Best Adapted Screenplay as well
as the Golden Globe for Best Screenplay and Best Screenplay awards from the
Writers Guild of America among others. For her performance in the film she
was honored with a Best Actress award from BAFTA and nominated for a Golden
Globe and an Academy Award. Her performance
in Richard Curtis’ LOVE ACTUALLY earned Thompson Best Actress in a
Supporting Role at the 2004 Evening Standard Film Awards, London Film Critics
Circle Awards and Empire Film Awards, along with a BAFTA nomination. In 2013, Thompson’s moving portrayal of
author ‘P.L. Travers’ in SAVING MR. BANKS earned her both the National Board of
Review and Empire Best Actress Awards, along with Golden Globe, Broadcast Film
Critics, SAG and BAFTA nominations.

Thompson
completed filming this summer in Scotland on THE LONG MIDNIGHT OF BARNEY
THOMSON opposite Robert Carlyle and Ray Winstone, and on director Ken Kwapis’ A
WALK IN THE WOODS, opposite Robert Redford and Nick Nolte. She is also part of
Jason Reitman’s MEN, WOMEN AND CHILDREN as well as the upcoming ADAM JONES, starring
Bradley Cooper.

In March of this year, to the
delight of both critics and audiences, she portrayed ‘Mrs. Lovett’ in the New
York Philharmonic’s staged production of Stephen Sondheim’s SWEENEY TODD: THE
DEMON BARBER OF FLEET STREET, opposite
bass-baritone Bryn Terfel, in the title role. She and Terfel will reprise their
roles, in a limited run at the London Coliseum with the English National Opera,
for the ENO’s first ever season of musical theater, in March of 2015.

In 2010, she reprised the title
role of the magical Nanny in NANNY
MCPHEE RETURNS, for which she also wrote the screenplay and acted as an
Executive Producer.  Thompson created the character for the screen
originally in 2004, in her own adaptation of NANNY MCPHEE, DIRECTED by Kirk Jones. In 2004, she brought to
the screen JK Rowling’s character of Sybil Trelawney in HARRY POTTER AND THE PRISONER OF AZKABAN, for director Alfonso Cuaron, and in 2007, she reprised
the role in HARRY POTTER AND THE ORDER
OF THE PHOENIX, for director David Yates.

As previously announced, Benedict Cumberbatch
will receive The Variety Award at this year’s MBIFAs.

This year’s nominations were announced on 3rd
November at St Martins Lane, London. The nominees for Best British Independent
Film were ’71; CALVARY; MR TURNER; PRIDE and THE IMITATION GAME. Leading the
charge this year is ’71 with nine nominations; PRIDE with seven nominations and
CATCH ME DADDY; FRANK and MR TURNER with five nominations each.

Now in its 17th year, the Awards were created by Raindance
in 1998 and set out to celebrate
merit and achievement in independently funded British filmmaking,
to honour new
talent, and to promote British films and filmmaking to a wider public.

Moët & Chandon is the champagne of success and glamour since 1743.
Renowned for its achievements, firsts and legendary pioneering spirit, Moët
& Chandon is the Maison that introduced champagne to the world. Synonymous
with the most venerable of traditions and the most modern of pleasures, Moët
& Chandon has celebrated life’s most triumphant moments with grandeur and
generosity for more than 270 years.

The Champagne of Cinema

For nearly a century, Moët & Chandon has
celebrated the glamour and the red carpet magic of international cinema. The
Maison is a strong and long-time supporter of film awards and ceremonies, such
as the Golden Globes, and the International Film Festivals in Venice and San
Sebastian to name a few.

Images from the 2013 Awards ceremony are available
to download from

All films
must be submitted for consideration by September 19th 2014.

A feature
film will be eligible for an Award if:

It is
intended for theatrical release, AND has had a public screening to a paying
audience either on general release in the UK OR has screened at a British-based
film festival between 1st December 2013 and 30th November 2014.

Where
there is any major studio substantially funding a film, the total budget must
not exceed $20M. Films are not defined as “independent” strictly on the terms
of financing.

A feature
film must be no less than 70 minutes in length.

Best
British Feature Documentary. In 2003 the British Independent Film Awards
introduced this new award. Eligible films must be non-fiction. They should
be photographed in actual occurrence, or employ partial re-enactment, stock
footage, stills, animation, stop-motion or other techniques, as long as the
emphasis is on fact and not on fiction. (Further eligibility criteria as with
other feature films above).

British
Short Film Award submissions: Any British short film that has been accepted as
part of the Official Selection at one of BIFAs recognised film festivals [See
bifa.org.uk] OR has won an award during the eligibility period. Any
variations are at the sole discretion of BIFA. A short film must be no longer
than 40 minutes (including credits).

All
eligible films submitted for consideration will be viewed by the BIFA
Pre-Selection Committee.  Members vote by secret ballot firstly to draw up
a long list then again to determine the nominations. All nominated films are
then viewed by an independent Jury appointed each year. The winners are
announced during the evening of the Awards Ceremony.  [See Voting Policy]

The
Special Jury Prize will be decided entirely at the Jury’s discretion.

The Variety
Award recognises an actor, director, writer or producer who has helped to
focus the international spotlight on the UK

The
Richard Harris Award for Outstanding Contribution to British Film by an Actor
(male/female) to be decided by the Advisory Committee with the input of the
Harris family.

Under
exceptional circumstances, inclusion and consideration of films which do not
strictly comply with the above criteria will be subject to the discretion of
the British Independent Film Awards Advisory Committee.

All
decisions made by BIFA and its members are final and no correspondence will be
entered into as to why particular entries were or were not nominated.