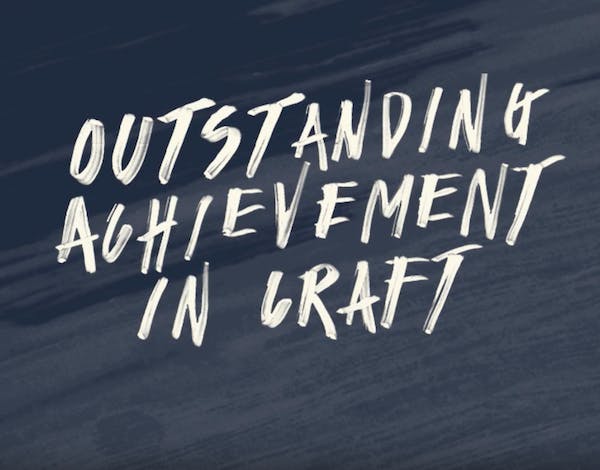 Unlike in many other BIFA categories, the nominees in the Outstanding Achievement in Craft category this year are tried-and-tested, battle hardened, industry veterans. Combined, these six nominees have over 90 years’ experience in the film industry (at least 15 years’ experience each on average, maths nerds).

Three of them, Robbie Ryan, Joakim Sundström and Shaheen Baig, have previous BIFA nominations. Robbie Ryan. This is cinematographer Robbie Ryan’s fourth BIFA nomination, having previously been nominated for his work on co-nominee Andrea Arnold’s Fish Tank, Sally Potter’s Ginger & Rosa and Daniel Wolfe’s Catch Me Daddy. Swedish-born sound designer Joakim Sundtröm was not only nominated in 2002 for his work on Michael Winterbottom’s In This World, he also took home a BIFA trophy in 2012 for sound design on Peter Stickland’s Berberian Sound Studio. 2016 will be Shaheen Baig’s second time at BIFA as a nominee, having previously been nominated for casting David Mackenzie’s Starred Up. Despite this, the ceremony won’t feel too unfamiliar to her – the actors she casts have been BIFA-nominated time and time again.

Visual effects supervisor Seb Barker, editor Paul Monaghan and director / editor Mat Whitecross are all BIFA-nominated for the first time but they certainly can’t be classed as ‘newcomers’. Seb Barker has worked on feature films since 2007, including on BIFA nominee 28 Weeks Later and BIFA and BAFTA-winning short The Karman Line, whilst Mat Whitecross and Paul Monaghan have known each other since the early days of the film industry when the worked at Revolution Films with Michael Winterbottom and Andrew Eaton.

Robbie Ryan is an Irish cinematographer with an expansive repertoire, having served as DOP on over 80 film projects including features, shorts, commercials and music videos. He has worked with directors such as Ken Loach, Andrea Arnold and Stephen Fryer. He is known by his colleagues as an ‘actors’ DP’ for having a unique knack for always seeing the magic moments and catching them.

‘The actor John Lynch on my film Isolation called Robbie ‘total football’ and that’s perfect. Robbie was lining up a shot of John’s hands turning a lever, John asks him will he see his face? Robbie shakes his head, then halfway through the shot Rob thinks right I’ve enough of this boring lever, let’s see what John is up to and snaps the camera upwards. Total football and great stolen moments.’

– Billy O’Brien, director, I Am Not a Serial Killer

Star (Sasha Lane), an adolescent girl from a troubled home, runs away with a traveling sales crew who drive across the American Midwest selling subscriptions door to door. Finding her feet in this gang of teenagers, one of whom is Jake (Shia LaBeouf), she soon gets into the group’s lifestyle of hard-partying nights, law-bending days, and young love.

Shaheen Baig gained her first casting director credit on Alejandro Amenábar’s The Others starring Nicole Kidman, and established her own company in 2001 after working for some of the UK’s leading casting directors. Since then, Shaheen Baig Casting has earned a reputation for finding and nurturing new and diverse acting talent, as well as supporting promising new filmmakers and established directors in film and television.

‘We bounced around many ideas. Ben and Andy like to work in this way – we’d throw curveballs all the time, playing with the casting and thinking of ways to reinvent actors in new ways – taking them away from the common perception of them into roles that, perhaps, they have never played before. It was a great challenge to think of actors who were not known for comedy and vice-versa.’

Free Fire follows Justine (Brie Larson) who has brokered a meeting in a deserted warehouse between two Irishmen (Cillian Murphy, Michael Smiley) and a gang led by Vernon (Sharlto Copley) and Ord (Armie Hammer) who are selling them a stash of guns. But when shots are fired in the handover, a heart stopping game of survival ensues.

Seb Barker – Visual Effects Supervisor, The Girl With All the Gifts

Seb Barker is an English visual effects artist. He is known for his work on 28 Weeks Later, RocknRolla and Vampire Killers. He works with the Automatik VFX company.

‘The final, and greatest, challenge for Seb was to create the BT Tower which Melanie would later burn to the ground, along with the spore aftermath which ends life on Earth. Once again, this needed to look both incredibly dramatic, but also simple and natural, prefectly integrated within the storytelling style Colm had devised – impactful but seamless.’

– Camille Gatin, producer, The Girl With All the Gifts

The Girl With All the Gifts puts us in a dystopian future, where scientist and a teacher start a journey with a special girl.

Joakim Sundström is a Swedish supervising sound editor, sound designer and musician. He has worked with acclaimed directors including Michael Winterbottom, Kevin Macdonald and Fernando Meirelles, with whom he collaborated on the BIFA, BAFTA and Oscar-winning The Constant Gardener.

‘Joakim’s sound design is often all that roots us in John’s world, all that connects us with the now disembodied voices of John’s family and children. At other times the sound design is less grounding as it is transportive: it takes us into John’s imagination, deep inside the optic nerve, through aortic pulses and synaptic crackles, sourced from medical recordings. At times revelatory, in the case of the rain, elsewhere Joakim’s design evokes a profound absence and loss, most especially during John’s return to his hometown in Melbourne, where the distant wind is seemingly all that remains of the landscapes of his childhood, now inaccessible to him.’

After losing sight, John Hull knew that if he did not try to understand blindness, it would destroy him. In 1983 he began keeping an audio diary, documenting his extraordinary journey into ‘a world beyond sight’.

Supersonic director Mat Whitecross and editor Paul Monaghan have known each other since their early days in the film industry, working at Revolution Films for Michael Winterbottom and Andrew Eaton – first as runners, and then in a wide variety of different roles, before editing together on The Shock Doctrine and Moving to Mars.

‘We placed hundreds of cards on the walls of the edit suite, with scenes and themes and characters, trying to make sense of the overarching story. As is often the case, moments that we had assumed were crucial – such as the stage invasion in Newcastle, or the Britpop rivalry with Blur – were excised in the final month of the edit. Finding the essential story and creating shape where none was apparent was the hardest part of the process.’

Supersonic gives us a revealing look at the meteoric rise of seminal ’90s rock band Oasis, weaving never-before-seen concert footage with candid interviews and a firsthand account of the backstage sibling rivalry that threatened to destroy the band.