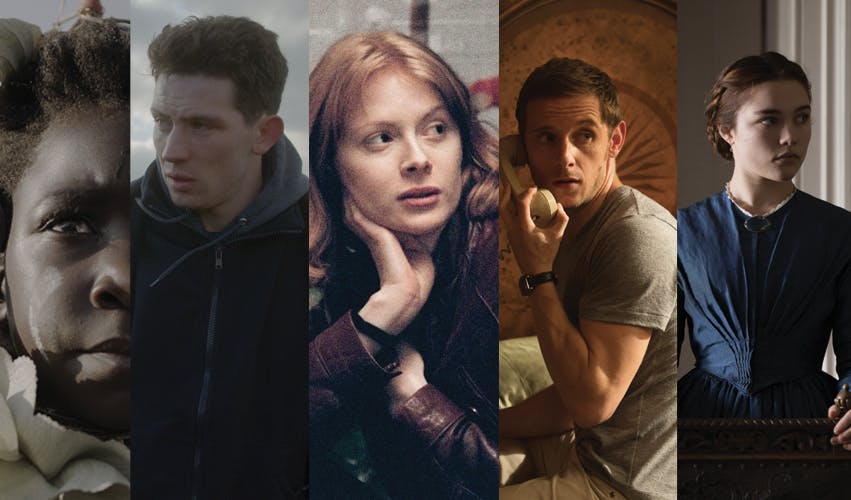 The nominees for Best Actor and Actress at BIFA 2017 are an exciting and diverse group of talents. Performing in nine different films, we have fighters, peacemakers, lovers and avengers, of ages ranging from 9 to 60 years old. In the time of Brexit and Trump-induced xenophobia, it’s pleasing to see four different nationalities represented to combat closed minds and closed borders, including newcomers Margaret Mulubwa from Zambia and Alec Secareanu of Romania. Diversity is essential to the success of British film; how great it is to see people of entirely different backgrounds achieve this recognition.

Both Cheltenham-born Josh O’Connor and Secareanu are nominated for playing Johnny and Gheorghe respectively in God’s Own Country. Johnny’s bitter suppression of his sexuality is reflected in a most compelling way against Gheorghe’s quiet kindness; BIFA voters responded very well to the subtle, truthful performances from Josh and Alec.

There are also two boxers in the Best Actor ring this year. Paddy Considine is a BIFA veteran with one previous win and five other nominations, including two for this very award. In his second film as writer/director, he stars as champion Matty Burton, a man who must overcome an immense personal battle outside of the ring. Considine’s contemporary Johnny Harris receives his first BIFA nomination for playing the tormented Jimmy McCabe in Jawbone with real honesty – as voters said, ‘pure, simple, heartfelt, unpretentious’. As Peter Turner in Film Stars Don’t Die in Liverpool, Jamie Bell is a lover not a fighter; Turner’s May-December romance with Hollywood icon Gloria Grahame mixes passion with poignancy – and a quick throw-back to Bell’s dancing days.

All five Best Actress nominees are BIFA newcomers; all five tell distinct, original stories. Frances McDormand’s formidable performance as vengeful mother Mildred Hayes in Three Billboards Outside Ebbing, Missouri touches you to the core and reminds us of her greatness. An established TV star, Ruth Wilson proves her film credentials in Clio Barnard’s Dark River; when her farmer Alice confronts the nightmares of her past, Wilson’s magnetism keeps us hooked.

Free spirits abound in this category; as the eponymous Daphne, Emily Beecham conveys the concurrent humour and fear felt by young Londoners in a charming performance. As a young girl accused of witchcraft, Mulubwa’s silent examination of her crazy surroundings separates her from the crowd and is mesmerising from beginning to end. In Lady Macbeth, Florence Pugh embodies independence as Katherine – a fascinating character study of female liberation in Northumberland of the 1860s.

How can you pick two winners from those ten?! Come back on December 10 when we’ll be doing just that – and in the meantime read up on these talented folk below!

Did you know: Prior to taking the role of Gheorghe, Secareanu played Tyler Durden in a Bucharest stage production of Fight Club. ‘Prima regulă a Clubului de lupte…’

Did you know: When he won the Best Actor BAFTA in 2001 for Billy Elliot, his fellow nominees were that year’s Oscar winner (Russell Crowe) and three previous Oscar winners (Tom Hanks, Michael Douglas, Geoffrey Rush).

Did you know: Harris won the national Amateur Boxing Association light flyweight title aged 16, and much of Jawbone takes inspiration from his life.

Did you know: Josh worked with a Yorkshire farmer called John in preparation for his role, labouring in the fields to get the right techniques and physicality.

Did you know: Aged 18, Paddy played drums in a band called She Talks To Angels with Nick Hemming, now of Leisure Society. Another member of the band? A certain Mr Shane Meadows.

Did you know: Several of the scenes where Daphne stumbles around London were filmed on open streets, with Beecham occasionally interacting with unwitting members of the public.

Did you know: For her breakthrough supporting role in Carol Morley’s The Falling, Florence sent in her audition tape with just 20 minutes until submissions closed. Take comfort, all last-minute people.

Did you know: McDormand’s first experience of acting was, at aged 14, in the role that gives its name to a #BIFA2017 nominated film – Lady Macbeth!

Margaret Mulubwa – I Am Not A Witch

Did you know: Maggie was spotted on a location scout, but only cast some time later when a photo of her was WhatsApp’d to the chief of her town as part of the search for her!

Did you know: Next year Ruth will play her own grandmother in a TV series called The Wilsons, about a woman who discovers her deceased husband was a serial bigamist.