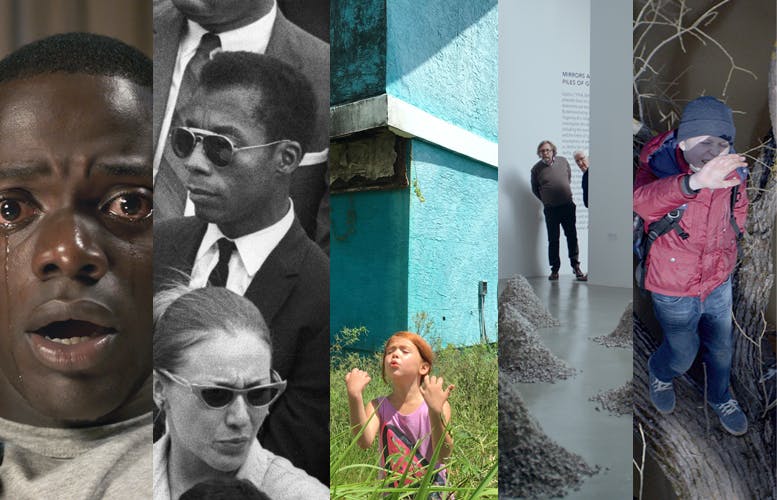 The American zeitgeist of disturbed race relations is explored not only in the commercial-smash and critical-darling Get Out but also in the final (and previously unread) words of esteemed author James Baldwin, brought to life in Oscar-nominated documentary I Am Not Your Negro. The Florida Project, meanwhile, paints a very different picture of the United States; a flash of colourful childish wonder in an otherwise drab portrait of American poverty. Cannes Film Festival favourites also feature in this category, including profoundly weird Swedish satire The Square, which won this year’s coveted Palm D’Or, and Loveless, a Russian psychodrama that lives up to its title quite spectacularly.

Read on to discover more about each title and watch the trailers:

TV comic Jordan Peele delivers one of the most exciting debut directorial features in years.

As Daniel Kaluuya’s Chris spends the weekend with his white girlfriend’s white family in their secluded countryside home, he finds himself at the heart of a series of increasingly frightening happenings.

I Am Not Your Negro

At a moment in time when the eyes of the world are again on the tribulations of black America, the decades-old observations of era-defining intellectual James Baldwin still ring out.

The celebrated writer never finished his memoir of the civil rights greats Martin Luther King, Malcolm X and Medgar Evans, but director Raoul Peck and the voice of Samuel L Jackson elevate the 30 pages he did manage to complete before his death.

In an unusual marriage of bright colour and bleak subject matter, director Sean Baker depicts the harsh reality of poor, uneducated America through the lens of a precocious child in the backyard of ‘the happiest place on earth’

Though the movie’s purple motel overlooks Disneyland, there is little escape for damaged single mother Halley, who resorts to turning tricks to make ends meet, and delightful Monnee, who keeps finding trouble with her young buddies.

Meanwhile Willem Dafoe gives one of his ever best performances as the warm but torn motel proprietor.

Cannes’ favourite film of the year is an alienating yet all-too familiar farce, a pointed portrait of pretension in the art world.

At its heart Swedish star Claes Bang delivers an all-round performance as the hapless gallery curator struggling to attract an audience as he grapples with life’s odd obstacle: thieves, tourettes and romantic trysts.

The other hit from Cannes, which won the Jury Prize, makes equally precise observations, but in a rather relentlessly bleak way.

Off the back of his masterpiece Leviathan, Russia director Andrey Zvyagintsev tells the tale of a boy lost in the woods, and his divorcing parents’ desperate search. This cutting critique of emotionality in Russian society is sophisticated and deliberate, a challenge but truly rewarding.