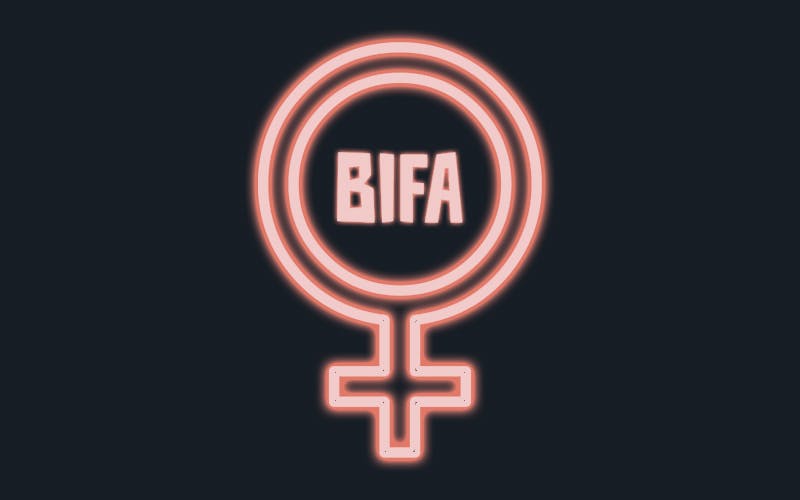 The BFI’s Filmography online app is an amazing resource for film and data nerds alike (have a look here, if you’re not sure what we’re talking about). It catalogues over 10,000 films, 600,000 roles and 250,000 film professionals to build a comprehensive overview of the history, obsessions and, more importantly, diversity of the British film industry in the last 100 years. Predictably, the numbers don’t stack up brilliantly for women: even today they only make up 40% of the workforce, and just 13.6% of feature films in the last decade have been directed by women. The problem doesn’t seem to be getting better quickly either, with female directors still underrepresented amongst the UK’s emerging filmmakers: Directors UK reports that between 2014 and 2017, only 27.2% of short films were directed by women, and that 21.7% of films made with public funding had female directors (down from 32.9% in 2008).

As part of our yearly entry process, we perform an analysis on films submitted to BIFA, as well as our nominees and winners, to help gain a better understanding of the state of British film and the challenges we face trying to build a more representative and inclusive industry.

(N.B.: categories where nominees are groups rather than individuals, such as Best British Independent Film, have been left out for this analysis)

The results show a similar picture to the BFI and Directors UK’s reports, albeit with  surprising and sometimes encouraging insights. The average number of women featured across the board is just over 35%, in line with the industry average reported by the BFI (which also includes professionals working in development, distribution and exhibition). Both experienced and newcomer female directors remain significantly unrepresented in the industry: higher than the decade industry average of 13.6%, but still not involved in even a quarter of the UK’s films. Emerging female writers, on the other hand, are noticeably more involved this year than last year, with a big jump from 13% to 31% of BIFA entries to the Debut Screenwriter award written by a woman. Another area in which women feature more prominently than before is the Breakthrough Producer category, where 44% of the entered producers this year were female (up nearly 10% from last year).

“It’s particularly encouraging to see a surge in women in the Debut Screenwriter category, which was won by Rachel Tunnard last year, and has some strong contenders by women this year too. Awards such as the BIFAs shine a light on people who can become role models to others – ‘if you can see it, you can be it’. It’s our job to understand this responsibility, be aware of our own biases (we all have them) throughout everything we do so that we can all pull together to create a more equal film world”

Our new Craft categories have introduced particularly interesting data. Although women lag behind their male counterparts in most areas, there are three categories in which they dominate, making up more than 70% of Casting Directors and Costume Designers and over 90% of Make-Up and Hair Designers. Most of the six remaining categories see woeful proportions of craftswomen, with the highest being Production Design (43%) and the lowest the Best Effect category, for Special and Visual Effects (6%). Clearly the process of de-stigmatising certain industry roles must continue: more women must be trained to enter technical fields of filmmaking, such as cinematography, editing, effects, sound design and music. Similarly more men should be encouraged to pursue careers in areas where their representation is poor, such as make-up and hair design, costume design and casting. We must also increase our efforts to celebrate the underrepresented groups; with great visibility comes greater inclusion.

“Having role models is a key: it opens doors and create awareness, and this is something that is already happening. Andrea Arnold won big last year at the BIFAs and you can see lately how young filmmakers (women and men) quote her as a main reference. The fact that the crafts are now in different categories and nominations might be also a huge help: it will create opportunities for craftspeople who would previously go unrecognised to be highlighted, and their work championed.”

(N.B.: categories where nominees are groups rather than individuals, such as Best British Independent Film, have been left out for this analysis)

There are promising signs in this nominations data; of the six categories present at last year’s awards, four have increased their female representation, including the representation in Best Debut Screenwriter more than doubling and four of the five films in Breakthrough Producer having a woman represented. In one of the two categories to decrease representation, Most Promising Newcomer, the balance across the two years is 50/50. Of the nine craft categories, six increase their representation of women when moving from entries to nominations, most notably in Production Design and Sound Design.

Predictably, the craft categories still tend to the same biases as in the entries data, with underrepresentation of women in Cinematography, Editing, Effects, Music and Sound Design, and no men nominated in Casting, Costume Design and Make-up & Hair. These may be the areas that require the most effort to address the imbalance moving forward.

2017 is a big year for BIFA, with the new craft categories rewarding film talent who previously might have struggled to achieve recognition. We hope that these new categories, as well as our established categories for both experienced and emerging film talent, will help highlight more female craftspeople and provide inspiration for women who are considering entering the film industry in any role. We make, and go to, the cinema to see ourselves and the world around us. Everyone deserves to be part of that.

“The independent sector is the breeding ground for the next generation of talent at every level of our industry and so BIFA is a vital part of recognising the urgent need for representation right across the board; not just in terms of gender but in terms of issues including ethnicity, disability and what for me is the crucial factor – that of socioeconomic access.

It’s heartening to see that BIFA’s work is encouraging and celebrating this new generation with statistics that hit way above industry averages, but greater acknowledgement of not just the status quo but the very real barriers to entry are needed for us all to keep progressing to a better, more balanced place.