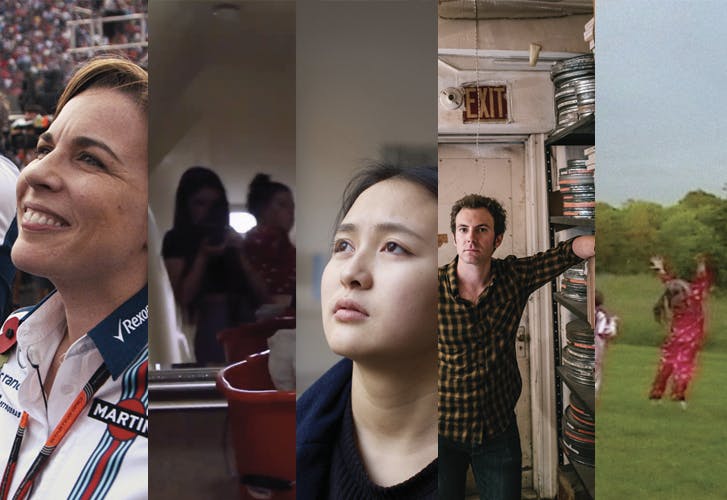 An overview snap shot conveys an equal split of first-time and established filmmakers, solid gender balance both in subject matter and talent, and interestingly, a significant presence for archive-based fare. Given the dominant trend of documentaries about celebrities and artists (music documentaries made up half of this year’s submissions), it is heartening to see that the two films in the shortlist that do centre around established personalities – Morgan Matthew’s Williams and Aaron Brookner’s Uncle Howard – both explore their subjects from distinctive and authored perspectives.

Directed by two-time BIFA nominee Morgan Matthews and produced by Sarah Hamilton and Hayley Reynolds [who has since joined the BBC Storyville team], Williams charts the rise of Formula 1’s best-known family, basing much of the story around diaries of Williams’ late wife and their life together, and thereby bringing the women at the heart of the Williams team into focus. The story is told through a combination of archive footage, present day interview and subtle reconstruction; in the inaugural year of separate craft categories, the film’s editor Johnny Burke was nominated for best editing.

Deftly merging family archive, hitherto unseen footage of William Boroughs and musings from a cast of American indie filmmakers including Jim Jarmusch, Uncle Howard is also an ode to an era and an ethos that enabled creativity to thrive. Produced by UK-based Paula Vaccaro, the film is a layered and delicate homage not only to a talented director – Howard Brookner, the filmmaker’s own uncle, who died of AIDS early in his promising career – but also the craft of filmmaking and storytelling itself.

Personal archive also connects the dots in Lucy Cohen’s Kingdom of Us, produced by Pulse’s Julia Nottingham and filmed over many years with a family of seven children and their mother, trying to make sense of the sudden suicide of their father/husband. Sensitively exploring complex family dynamics including the fact that many of the children are on the autistic spectrum, Cohen’s intimate documentary picked up the Grierson Award for Best Documentary at the London Film Festival where it was unveiled a few days ahead of its release on Netflix.

Whilst also centering on a family story, Daisy May Hudson’s debut documentary Half Way is a first person narrative – recording her family’s sudden homelessness and struggle to find somewhere to live. Completed in 2015 by an independent team of first time filmmaker friends, Hudson became a BAFTA Breakthrough Brit in 2016 and self released the film in 2016-7, accruing impressive visibility and underlining that the country’s housing crisis and the threat of homelessness can affect anyone.

Finally, a coming of age story set in one of China’s largest funeral homes. Almost Heaven, a delicate, observational gem by editor-turned-director Carol Salter debuted in Berlin, where it was also nominated for the Inaugural Glasshüte Original Documentary Award. Made entirely independently – Salter set out to China alone after reading an article about young Chinese morticians and felt compelled to explore the phenomenon herself, as a way of engaging with the reality of death and her own fears of it – it was also self-released in collaboration with MUBI this autumn.

That documentary titles with huge variations in financial support sit alongside each other is encouraging. Though an eclectic group of films, it is significant that it is the smaller scale, intimate stories that rose to the top of this year’s submissions. I hope that this will encourage funders and commissioners to invest in the distinctive visions of new voices and in the smaller stories as well as the commercially obvious, for they can also have the loudest resonance in uncertain times.