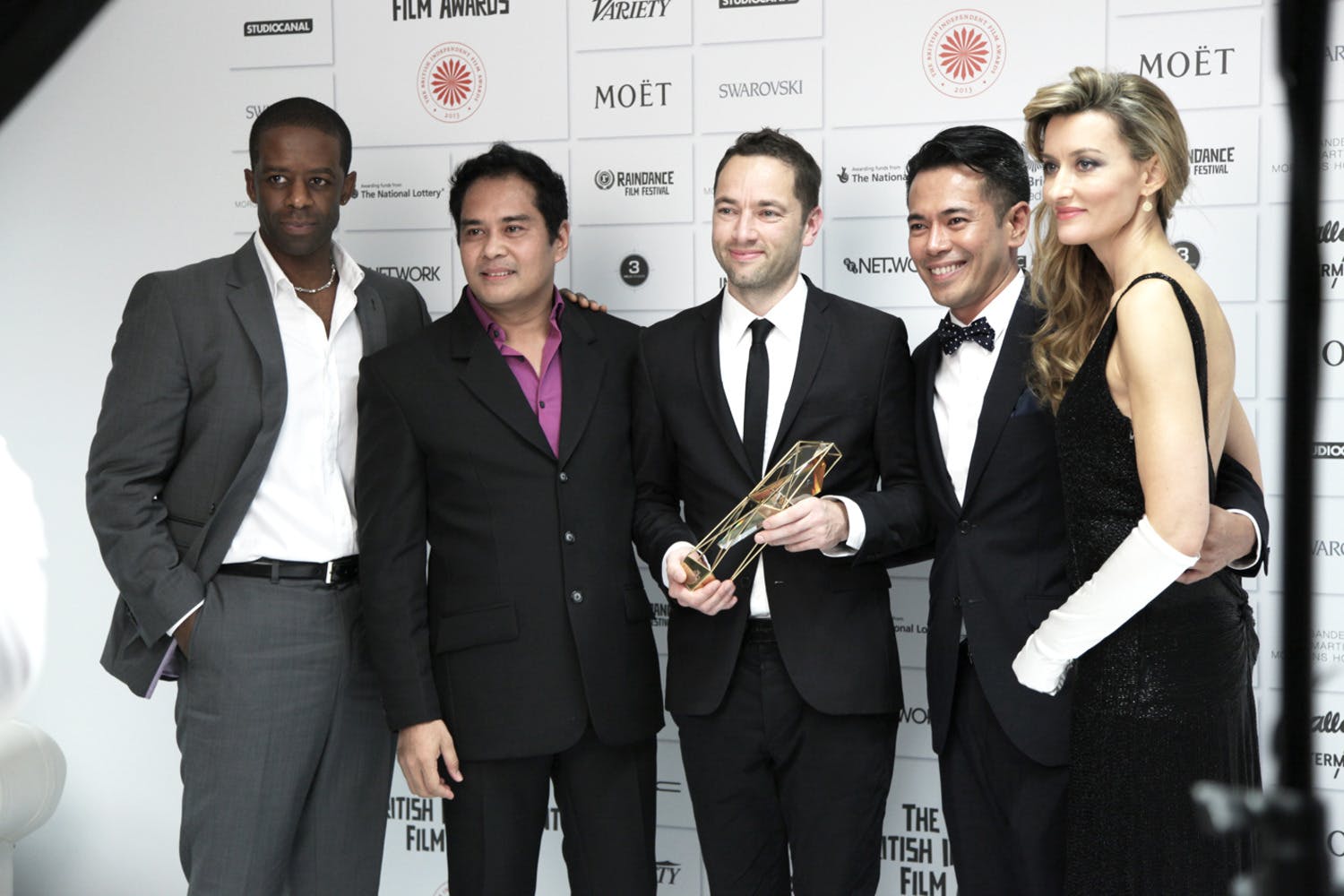 London,
Sunday 8th December – British talent turned out this evening for the
16th Moët British Independent Film Awards. The winners were
announced at the star-studded ceremony, held at Old Billingsgate which was
hosted by BIFA Winning actor James Nesbitt.

For the first time, the lucky winners took home the
brand new iconic award designed by Fredrikson Stallard and created by
Swarovski.  The awards ceremony was
streamed live exclusively online at www.film3sixty.com/moetbifa

METRO MANILA won
the most awards on the night, picking up three trophies for Best Achievement in
Production and as previously mentioned Best Director award and Best British
Independent Film.

Joint Directors, The Moët
British Independent Film Awards Johanna von Fischer & Tessa Collinson said:
“This year our independent jury had an extremely tough job, they were
asked to choose from an impressive pool of talent and creativity in a year
where the diversity of storytelling is more extreme than ever. Thanks to an
independent film industry which encompasses so many different cultures,
personalities, visions and voices, Britain is producing a new generation of
fearless artists both behind and in front of the camera who represent that
richness of our diverse British society. With so many of the films exploring
themes about being less judgmental and more forgiving, this perhaps reflects a
movement within British independent filmmaking that brings much hope for the
future.”

As
previously announced, Julie Walters was
awarded the coveted Richard Harris Award for outstanding contribution by an
actor to British film, and Paul
Greengrass the Variety Award, which recognises an actor, director, writer or producer who has helped
to shine the international spotlight on the UK. The Special Jury Prize went to Sixteen Films & Friends (AKA Team
Loach), in recognition of their contribution, bringing the work of Ken
Loach to life.

Ben Roberts, Director of the BFI Film Fund said:
‘this has been a standout year for British film and the BIFAs has once again
kicked off the awards season in style, putting the wild creativity and bold
storytelling of the UK’s independent sector centre stage. Congratulations to
all the winners and to the BIFAs for doing such a great job of spotlighting so
many brilliant filmmakers.’

Elsa Corbineau, Marketing Director Moët &
Chandon commented: “As a long term supporter of British film, Moët &
Chandon is delighted to share in the celebrations of tonight’s very well
deserved winners. To toast the successes of 2013, guests joined us in creating
a seven – foot champagne fountain to salute a year of amazing achievements.’

The Raindance
Award was won by THE MACHINE. Elliot Grove, Founder of BIFA and the Raindance Film Festival added: “The breadth, scope and quality of this year’s
nominated films shows that British independent films and talent are not only
the talk of the town but the talk of audiences everywhere.”

The
Moët British Independent Film Awards are proud to announce the following
winners for 2013:

Paul Wright – For Those in Peril

Imogen Poots – The Look Of Love

Blue is the Warmest Colour

Sponsored by Wentworth Media and Arts

In recognition of Moët & Chandon’s
generous contribution as headline sponsor, the 2013 event is referred to as The MOËT
British Independent Film Awards.

Recognised for its quality and
prestige, Moët & Chandon is the champagne of choice for celebration at
international film festivals. The venerable house has captured the attention of
Hollywood’s brightest stars since the birth of the film industry. Generations
of legendary actors, actresses, producers and directors have celebrated their
achievements with Moët & Chandon at the most significant and exclusive
cinema events, including the OscarsÒ & Golden GlobesÒ
celebrations.

Images from the
event can be downloaded from